A day with Frans Hals

Get to know Haarlem through the eyes of Frans Hals, one of its most famous 16th-century painters, on this overnight itinerary that includes culture, art, beer, burgers and even ice cream.

Haarlem’s cobblestone streets and stately windmills speak of its history as one of the Netherland’s most affluent trading posts. The first mention of Haarlem dates back to the 10th century but it was home to an active community long before the Middle Ages. Throughout the city’s rich past, 16th-century artist Frans Hals stands out as one of Haarlem’s most influential natives. Frans Hals was famous for using loose brushstrokes to capture the real essence of his portrait subjects, and his style influenced masters who came hundreds of years later, including Édouard Manet, Max Liebermann and Vincent van Gogh.

Spend a day getting to know Haarlem by connecting with Frans Hals on this walking tour that includes stops at the Frans Hals Museum, fantastic nearby restaurants and bars, and a stay in a historic hotel. The Frans Hals Museum is split up between two locations—Hof and Hal— which are just a seven-minute walk apart through a particularly pretty section of Haarlem. Buy tickets to the Frans Hals museum and structure a day around visits to its two locations for a great taster of Haarlem’s history and culture.

If you are coming from Amsterdam, take the 20-minute train right to Haarlem Central Station. It is about a 10-minute walk from the station to the Frans Hals Museum’s HAL location at Grote Markt 16 and the promenade through Haarlem’s charming historic streets is an ideal introduction to the day.

The Frans Hals Museum’s Hal location, right in Haarlem’s central square, is made up of three different buildings, each from a different century: Meat Hall, Fish House and Verwey Hall. Meat Hall was built by architect Fleming Lieven de Key in the 17th century as a butcher market but has been used as a museum since 1951, displaying work by artists including Rembrandt and Damien Hurst. The narrow Fish House was built around 1600 and was once home to the family that ran the local fish market, but in the early 1990s it was incorporated into the De Hallen complex, connecting Meat Hall and Verweyhall. Verweyhall was built in the late 1800s for Trou moet Blycken, a men’s club, and after its renovation in the the 1990s it was renamed after Haarlem painter Kees Verway. Here you’ll find intriguing exhibitions, often highlighting a theme from Frans Hals’ work as displayed by modern artists, demonstrating the timeless quality of his talents.

After you’ve worked up an appetite perusing architecture and art, take a five-minute walk to Jopenkerk, a restaurant and brewery set in a former church. The Grand Cafe is open for lunch, offering Dutch classics like croquettes, bitterballen and hot sandwiches that you can wash down with one of the bar’s own wide range of delicious Jopen beers. You can also take a tour of the brewery and sign up for a group tasting session to find out the story behind the brews.

If you still have room for dessert, take a short stroll to Garrone, a cute family-run ice cream parlour that’s been around since 1949. The award-winning creamy concoctions are made using Italian recipes, fresh fruit and a few surprising ingredients such as lychee and gooseberry and olive. If the sun is shining, take a cone to go and enjoy it en route.

Fortified with a hearty lunch and dessert, make your way to Frans Hal’s second location, Hof, on Groot Heiligland 62. During the Golden Age, the Hof location was a home for old men, where gentlemen whiled away their golden years. After that, it was used as an orphanage, and for a century it housed hundreds of children. In 1908, the municipality bought the buildings and city architect Lucas Christiaan Dumont renovated and redesigned large parts of it, transforming it into a space to display the municipal art collection. The Frans Hals Museum main collection can be found here, including the majority of Frans Hals’ paintings.

Enjoy dinner with a view at Fortuyn

When your need for dinner outweighs your appetite for art, circle back to Grote Markt and have a laid-back bite at Fortuyn. Their menu includes sustainably sourced meat and produce, cooked in a high-temperature Josper charcoal oven to amp up the flavour. Try one of their burgers—choose from Hereford beef or chickpea and aubergine—which are baked in the Josper oven, and see if you can taste the difference. While you dine and drink, take in the view of Haarlem’s bustle from the broad floor-to-ceiling windows that overlook the central square. If the weather is inviting, head to the terrace for a digestif.

Walk four minutes towards the Spaarne River to Haarlem’s Amrâth Grand Hotel Frans Hals, where reproductions of Frans Hals’ works adorn the walls. The rooms are decorated with his portraits hanging watchfully above the beds, so don’t be surprised if your dreams are rendered in Hal’s’ signature silvery sheen. It is only a kilometre from Haarlem Central Station, making it an easy walk to the trains after breakfast in the morning. Unless you aren’t quite ready to say goodbye to Frans Hals yet, in which case, stay a while and experience more of Haarlem.

Get tickets to Haarlem attractions 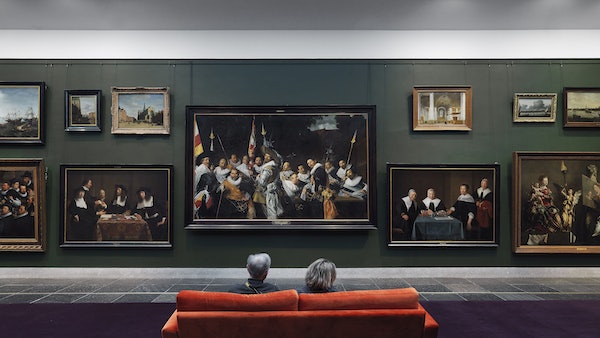 Explore the life of the famous Dutch Golden Age painter, Frans Hals
€16.00
Get your tickets 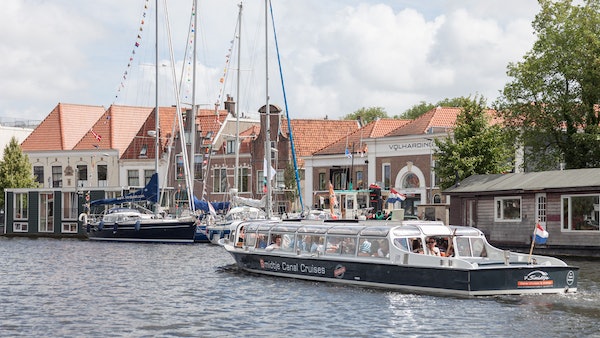 Get the best views of the historic city center of Haarlem from the water
€13.50
Get your tickets 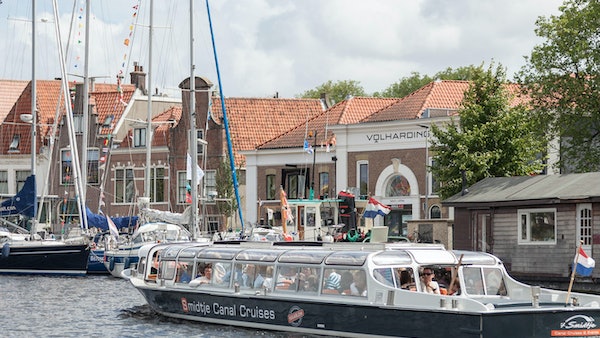 Make sightseeing a literal breeze with a hop on, hop off canal boat tour
20.00 €17.50
Get your tickets

Just 15 minutes from Amsterdam by train, Haarlem is a true shopper’s dream. Chock full as it is with quirky boutiques, fashion-forward concept stores ...
Read more

Here’s I amsterdam’s selection of restaurants that you have to visit when exploring Haarlem. And as the city is just a short 20-minute tra...
Read more

Here’s I amsterdam’s selection of charming cafés and delicious brunch and lunch spots that you have to visit when exploring Ha...
Read more

Looking for an authentic Dutch experience in the Netherlands? Why not visit Haarlem. Less than 20 minutes from Amsterdam, the city offers renowned cul...
Read more

A day with Frans Hals

Get to know Haarlem through the eyes of Frans Hals, one of its most famous 16th-century painters, on this overnight itinerary that includes culture, a...
Read more